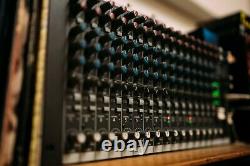 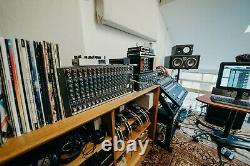 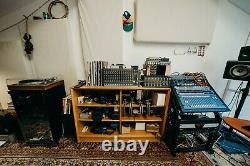 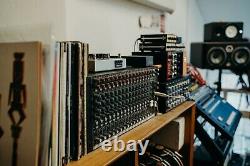 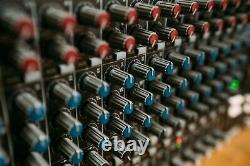 Here we have my trusty Mackie LM-3204 16 stereo (32 mono) channel line mixer. It was super useful before I had the Neve as the centrepiece of the studio, but now I'd like to make room for something else maybe a pair of 1176's! I won't list the features exhaustively because if you're interested in the unit then I'm sure you probably already know it's extensive uses, but basically it's 16 stereo channels into a 4 buss (2x2), with 3 band EQs on each stereo channel. It also has 4 aux sends (mono send and stereo return for each), a stereo pair of phono Ins/Outs, and 2 mic pre's. Initially I was using it so I could have hardware analogue inserts (via TRS patchbays which are also for sale) when mixing.

Later on it also became very useful to use as a'Synth Zone' with all the synths permanently plugged into it, and then just unmuted/routed accordingly when it's tracking time as and when. It's plugged up currently in the studio but isn't getting much love.

It's typical Mackie build quality (like a tank) and I guess it was designed potentially with more live usage in mind, so is hefty and suitably robust if you were thinking of taking it on the road. Bought around 3 years ago second hand from Funky Junk London, and only ever used and kept in a smoke-free studio. If you have any questions or would like some more photos (apologies I only have the ones from the website) feel free to just get in touch. The item "Mackie LM-3204 Line Mixer 19 Rack-Mount Unit" is in sale since Tuesday, June 29, 2021. This item is in the category "Musical Instruments\Pro Audio Equipment\Mixers".

anstruther1" and is located in London. This item can be shipped to United Kingdom.